Thanks to the recent Democratic adviser insulting mothers across American and Ann Romney personally, the Romney campaign is capitalizing on this incident to put out a new bumper sticker. The campaign sent supporters a letter stating,

If you’re a stay-at-home mom, the Democrats have a message for you: you’ve never worked a day in your life.

Ann Romney represents the best of what happens inside the American home every day. Family. Something to be cherished, not mocked.

Her choice was to stay at home and raise her five sons. That is no easy task for any mother — especially a woman who battled through breast cancer and multiple sclerosis.

As a mother and a former Chief of Staff to Governor Romney, I can say first-hand that raising my kids was the toughest job I’ve ever had.

We stand with Mitt and Ann in saying that all women play an important role in our country. America deserves a president who will bring us together — not pit us against each other. 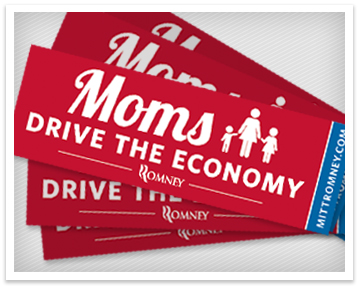 This entry was posted in 2012 elections, Democrat, Mitt Romney. Bookmark the permalink.