President Obama Standing On The Constitution 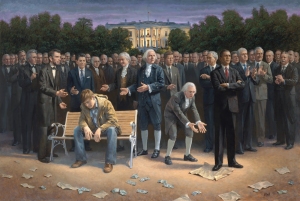 The Drudge Report linked to a painting yesterday called “The Forgotten Man” by artist Jon McNaughton. The painting has all the previous Presidents surrounding a man sitting on a bench with President Obama standing on a page of the Constitution. According to McNaughton, “For a long time I didn’t know if I wanted to paint this picture, because I worried it might be too controversial. This man represents every man, woman, and child who is an American… he hopes to find the American dream of happiness and prosperity.” McNaughton made a video of him creating this painting back in 2010;

Against the background of a darkening sky, all of the past Presidents of the United States gather before the White House, as if to commemorate some great event. In the left hand corner of the painting sits a man. That man, with his head bowed appears distraught and hopeless as he contemplates his future. Some of the past Presidents try to console him while looking in the direction of the modern Presidents as if to say, “What have you done?” Many of these modern Presidents, seemingly oblivious to anything other than themselves, appear to be congratulating each other on their great accomplishments. In front of the man, paper trash is blowing in the wind. Crumpled dollar bills, legislative documents, and, like a whisper—the U.S. Constitution beneath the foot of Barack Obama.

1 Response to President Obama Standing On The Constitution