President Obama has been talking about his ‘to-do list’ for Congress, so now the RNC have put together a ‘not done’ list for President Obama; 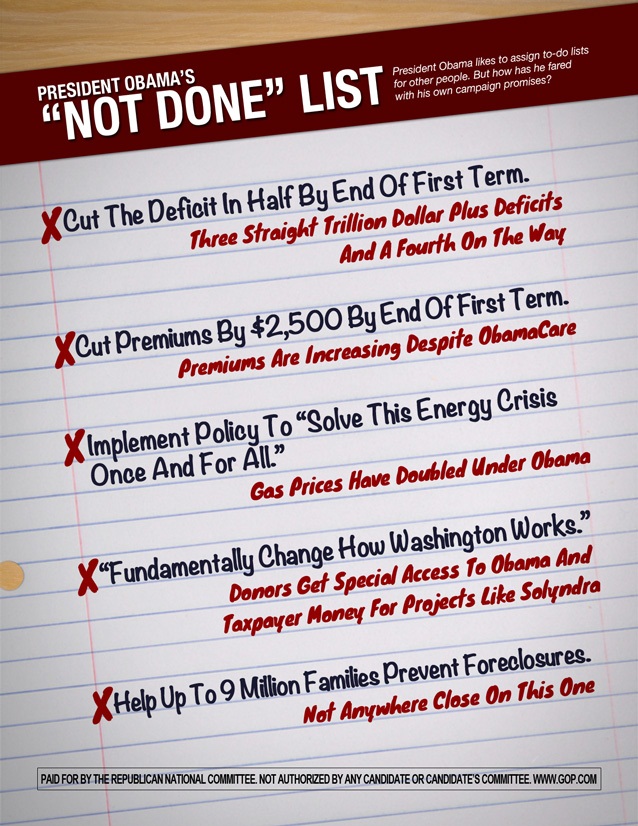 “Professor Obama is trying again to distract from his failed record on the economy, so he’s giving Congress a list of things to do and blaming them for his own failures,” said RNC Chairman Reince Priebus. “The irony is that the only ones doing their homework for the American people are House Republicans who have been working tirelessly to develop a pro-growth agenda focused on job creation and fiscal responsibility. On the other hand, the Do-Nothing Senate Democrats haven’t passed a budget in over a thousand days. Instead of assigning homework to Congress, Professor Obama should take a look at his own list of broken promises to cut the deficit in half, lower healthcare costs, solve our energy crisis, change how Washington works, and help 9 million families from foreclosure-just to name a few. This November, the American people will have a chance to give Barack Obama a grade of their own, and it won’t be an ‘incomplete.’ It will be an ‘F.'”