The Republican National Committee launches ObamanomicsOutsourced.com chronicling President Obama’s ‘sterling’ record of shipping the American recovery overseas. “President Obama has promised over and over that he would focus on creating ‘jobs that pay well and can’t be outsourced’ but his record speaks otherwise,” said RNC Chairman Reince Priebus. “Through his ‘stimulus’ program billions of dollars from hard-working taxpayers were sent overseas. The Outsourcer-In-Chief is going around the country touting his ‘jobs record,’ but the only positive record he has is creating jobs in faraway places like Finland and South Korea. He has resorted to vicious distortions of Governor Romney’s private sector business experience because he’s trying to distract from his own record of sending American dollars to fund diesel engines in Thailand and build wind turbines in Italy.” 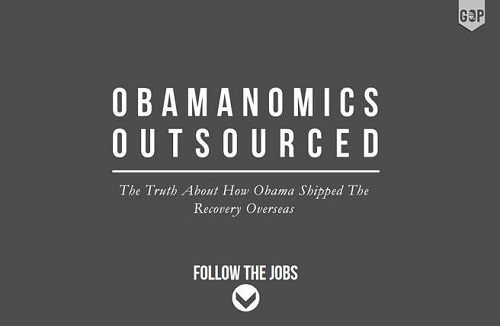 This entry was posted in 2012 elections, Republican, The Economy. Bookmark the permalink.