Rick Santorum has sent out an email to supporters asking for more money for Super Tuesday. The email states, “It’s hard to be an underdog. Let me tell you, it’s much more difficult to run a grassroots, shoe-leather campaign where you actually talk to voters, than to throw millions of dollars on TV.
But now, with 10 states voting in the next week, we need those millions.”
Then they show a picture of Santorum standing in front of the map of the United States striking a mean pose. “In Oklahoma they had hail as big as my fist.” 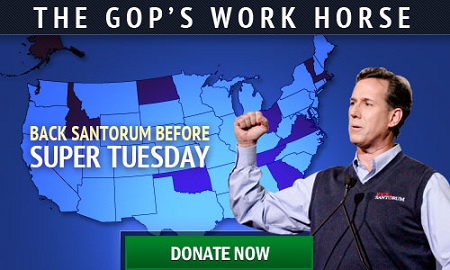 This entry was posted in 2012 elections, Campaign Ad, Rick Santorum. Bookmark the permalink.